Most Popular Jewelry Worn by Men

What Does A Watch Winder Do, And What Else Can They Offer?

Those with a birthday in November have two birthstones to choose from: citrine and topaz. Topaz comes in a wide variety of colors, including pink, red, and orange, but the most famous is blue topaz. Citrine comes in a range of colors, from yellow to orange-red. Both birthstones have a range of different properties and uses throughout history, and both are common as elements in jewelry today. This article has the history of both citrine and blue topaz, and their uses today.

Topaz has been widely used throughout history, and has always been thought to hold special properties. In ancient Greece it was believed to give holders strength, and so would often be used by warriors in battle. In the Middle Ages topaz was believed to carry a wide range of magical properties, including the ability to dispel magic and to calm anger. It as also used in a variety of medicines, sometimes being soaked in wine as a cure for blindness.

The common industry name for a range of hues is Imperial topaz. This gemstone either got its name from the Russian royal family, who were famous for wearing topaz after it was mined in the Ural Mountains, or from the Brazilian emperor Pedro II after it was discovered in a mining town that he visited. Either way, this history only served to make the gemstone more precious.

Blue topaz is the most common color available, although the colorless gemstone is also quite popular. The red and orange versions are much rarer, and as a result are much more expensive. Blue topaz is believed to have properties that aid the mind, including providing truth and wisdom. It also helps in bringing your body, mind, and spirit into alignment, and helps point you towards your inner truth. Topaz aids digestion and can be used to treat some eating disorders. Blue topaz carries a wide range of spiritual properties, and those with a November birthday are very lucky to have it as their birthstone.

Citrine also has a long history of use in the Western world. It was used as jewelry by the ancient Greeks, often favored for its warm hues. There is also record of citrine being mentioned in the Old Testament, where it was used as one of the stones in Aaron’s breastplate. It became popular in Scotland in the 17th century as a decoration on weapon handles, and was then used by Queen Victoria due to her appreciation for Scottish culture. Citrine has remained a popular choice throughout the 20th and 21st centuries because of its inviting color and healing properties. 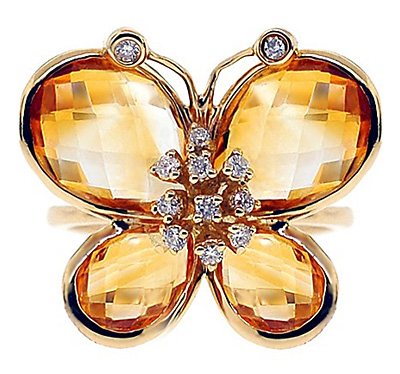 Citrine was carried by ancient travelers as a ward against snake bites and evil thoughts and spirits. It’s not commonly associated with success and prosperity, and has become associated with merchants. Its name comes from the French for lemon, which is a nod to its warm yellow hues. Citrine is a form of quartz, and so is one of the more common and affordable gemstones available.

Citrine carries a range of favorable properties, including its ability to transmute negative energy. It’s also associated with the attraction of wealth and success, hence why it’s known as a merchants’ stone. Citrine improves interpersonal relationships and can be used to solve relationship issues by fostering an environment of calm. It’s ideal for giving to newborns because it brings happiness, health, intelligence, and confidence, and it guards against spite and jealousy. Overall it’s a very powerful gemstone that carries a wide range of valuable properties for those looking to make their way in the world.

Citrine is a particularly popular stone for jewelry because of its warm and inviting colors. These go perfectly with gold, bronze, and brass, making it an ideal accessory. It’s common to find citrine pendants, citrine earrings, citrine rings, and citrine necklaces, all of which provide the wearer with protection and boost their natural energies.

Because citrine is a reasonably common gemstone, citrine jewelry is usually inexpensive and easy to get hold of. It’s also common to find citrine mixed with other gemstones, as its warm and neutral colors make it easy to match with a wide variety of colors and hues. Mixing it with other gemstones might change the energy given off by the jewelry, so make sure you investigate thoroughly before making a choice.

Blue topaz jewelry is also very popular, and its colder color makes it the perfect match to silver, platinum, and other metallic colors. However, lighter hues of blue topaz also go well with lighter hues of gold, such as yellow or silver. This makes it an incredibly versatile stone, and one that is bound to draw attention. It has much deeper hues that other blue stones, and can range anywhere from baby blue to deep aquamarine.

Blue topaz pendants and earrings are most common because these are pieces of jewelry that can be on show for everyone. Wearing blue topaz jewelry, such as a blue topaz necklace or bracelet is a perfect way to connect to the healing powers this gemstone provides. Keeping it closer to your skin will improve the connection, and enhance your truth.

Blue topaz and citrine are both very powerful gemstones, and both have very different, but useful properties. Those with birthdays in November have the choice between the two, but it can be very hard to make a decision about which would be more beneficial. Blue topaz is the better choice if you need to improve your truth and balance your mind and body, whereas citrine is a better choice if you’re looking for financial success. Regardless of which gemstone jewelry you choose, they both carry very powerful energy, and make beautiful jewelry.